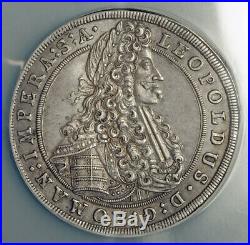 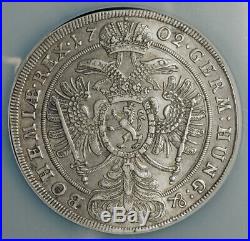 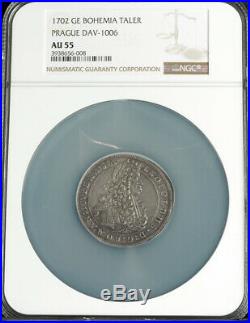 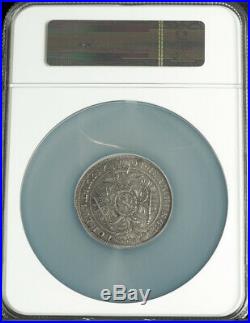 Leopold Ignaz Joseph Balthasar Felician. Habsburg (June 9, 1640 May 5, 1705), Holy Roman emperor, was the second son of the emperor Ferdinand III and his first wife Maria Anna of Spain. His maternal grandparents were Philip III of Spain and Margarita of Austria. He was a younger brother of Ferdinand IV of Hungary and Mariana of Austria.

Intended for the Church, he received a good education but his prospects were changed by the death of his elder brother Ferdinand IV, on July 9, 1654 of smallpox, when he became his father's heir. Short and sickly, he had inherited the Habsburg lip to a degree unusual even in his inbred family. One contemporary said of him "His gait was stately, slow and deliberate; his air pensive, his address awkward, his manner uncouth, his disposition cold and phlegmatic".

In 1655 he was chosen king of Hungary and in 1656 king of Bohemia, 1657 king of Croatia and in July 1658, more than a year after his father's death, he was elected emperor at Frankfurt in spite of the intrigues of Jules Cardinal Mazarin, who wished to place on the imperial throne Ferdinand Maria, Elector of Bavaria or some other prince whose elevation would break the Habsburg succession. Mazarin, however, obtained a promise from the new emperor that he would not send assistance to Spain, then at war with France, and, by joining a confederation of German princes, called the league of the Rhine, France secured a certain influence in the internal affairs of Germany.

Leopold's long reign covers one of the most important periods of European history; for nearly the whole of its forty-seven years he was pitted against Louis XIV of France, whose dominant personality completely overshadowed Leopold. The emperor was not himself a man of war, and never led his troops in person; yet the greater part of his public life was spent in arranging and directing wars. The first was with Sweden, whose king Charles X found a useful ally in the prince of Transylvania, György II Rákóczi, a rebellious vassal of the Hungarian crown. This war, a legacy of the last reign, was waged by Leopold as the ally of Poland until peace was made at Oliva in 1660. A more dangerous foe next entered the lists.

The Ottoman Empire interfered in the affairs of Transylvania, always an unruly district, and this interference brought on a war with the Holy Roman Empire, which after some desultory operations really began in 1663. By a personal appeal to the diet at Regensburg Leopold induced the princes to send assistance for the campaign; troops were also sent by France, and in August 1664 the great imperialist general, Raimondo Montecuccoli, gained a notable victory at Saint Gotthard. By the Peace of Vasvár the emperor made a twenty years' truce with the sultan, granting more generous terms than his recent victory seemed to render necessary. After a few years of peace began the first of three wars between France and the Empire.

The aggressive policy pursued by Louis XIV towards the United Provinces had aroused the serious attention of Europe, and steps had been taken to check it. Although the French king had sought the alliance of several German princes and encouraged the Turks in their attacks on Austria the emperor at first took no part in this movement.

He was on friendly terms with Louis, to whom he was closely related and with whom he had already discussed the partition of the lands of the Spanish monarchy; moreover, in 1671, he arranged with him a treaty of neutrality. In 1672, however, he was forced to take action. He entered into an alliance for the defence of the United Provinces during the Franco-Dutch War; then, after this league had collapsed owing to the defection of the elector of Brandenburg, the more durable Quadruple Alliance was formed for the same purpose, including, besides the emperor, the king of Spain and several German princes, and the war was renewed.

At this time, twenty-five years after the peace of Westphalia, the Empire was virtually a confederation of independent princes, and it was very difficult for its head to conduct any war with vigour and success, some of its members being in alliance with the enemy and others being only lukewarm in their support of the imperial interests. Thus this struggle, which lasted until the end of 1678, was on the whole unfavourable to Germany, and the advantages of the Treaty of Nijmegen were with France. Almost immediately after the conclusion of peace Louis renewed his aggressions on the German frontier through the. Engaged in a serious struggle with the Ottoman Empire, the emperor was again slow to move, and although he joined the Association League against France in 1682 he was glad to make a truce at Regensburg two years later. In 1686 the League of Augsburg was formed by the emperor and the imperial princes, to preserve the terms of the treaties of Westphalia and of Nijmegen. The whole European position was now bound up with events in England, and the tension lasted until 1688, when William III of Orange won the English crown through the Glorious Revolution and Louis invaded Germany. In May 1689, the Grand Alliance was formed, including the emperor, the kings of England, Spain and Denmark, the elector of Brandenburg and others, and a fierce struggle against France was waged throughout almost the whole of western Europe. In general the several campaigns were favourable to the allies, and in September 1697, England, Spain and the United Provinces made peace with France at the Treaty of Rijswijk. To this treaty, Leopold refused to assent, as he considered that his allies had somewhat neglected his interests, but in the following month he came to terms and a number of places were transferred from France to Germany. The peace with France lasted for about four years and then Europe was involved in the War of the Spanish Succession. The king of Spain, Charles II, was a Habsburg by descent and was related by marriage to the Austrian branch, while a similar tie bound him to the royal house of France. He was feeble and childless, and attempts had been made by the European powers to arrange for a peaceable division of his extensive kingdom. Leopold refused to consent to any partition, and when in November 1700 Charles died, leaving his crown to Philip, duke of Anjou, a grandson of Louis XIV, all hopes of a peaceable settlement vanished. Under the guidance of William III a powerful league, a renewed Grand Alliance, was formed against France; of this the emperor was a prominent member, and in 1703 he transferred his claim on the Spanish monarchy to his second son, the Archduke of Austria, also known as Charles III of Hungary. The early course of the war was not favourable to the imperialists, but the tide of defeat had been rolled back by the great victory of Blenheim before Leopold died on May 5, 1705. The item "1702, Bohemia, Emperor Leopold I.

NGC AU-55" is in sale since Thursday, August 15, 2019. This item is in the category "Coins & Paper Money\Coins\ World\Europe\Czech Republic". The seller is "coinworldtv" and is located in Wien. This item can be shipped worldwide.