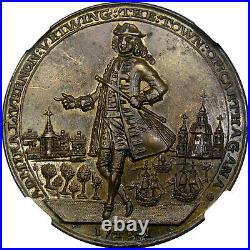 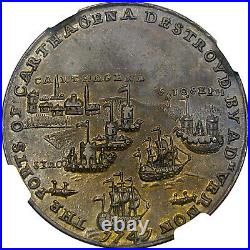 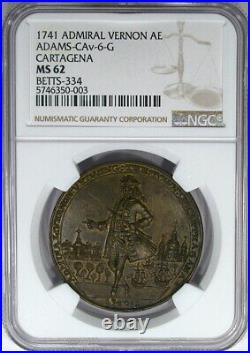 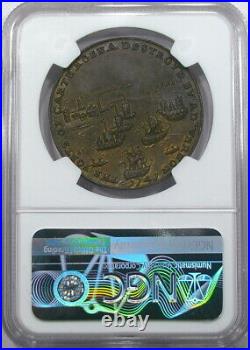 Though one of the more common Admiral Vernon medals in a series of about 250 separate designs, all are very rare in Mint State. And, this piece quickly got our attention due to the surprisingly even, glossy brown patina and great luster.

This particular variety seems to come with extremely splotchy toning spots in Mint State, so this is one of the most attractive UNC example we have seen of the variety. Rich, glossy, and lustrous olive tan brown and icy blue surfaces with traces of the original, golden, Pinchbeck brass revealing themselves in the protected areas. The only striking flatness is seen on the highest points of the forts in the reverse center; typical when the opposite side of the coin is in such high relief.

This variety comes on a very thin planchet, which also may not have supplied enough metal to fill the dies, in many cases. A few short scuffs, left of Vernon's portrait, are all that prevent a Choice or even better MS grade on this otherwise exceptional piece. NGC pop 3 in MS62, 1 in MS63. Fresh from a collection put together and off the market since in the 1950s, this is also the only Mint State example on the NGC pop report that does not come from the Eric P. Admiral Vernon's self-predicted victory over the Spanish treasure port of Porto Bello (Panama) in 1739, and nearby Fort Chagre in early 1740, made him an instant hero and led to the striking of hundreds of different commemorative medals all over Great Britain.

These events marked the first major British victories in over 30 years, and England had been growing nervous about her military prowess. Porto Bello was the grand prize, but the following, quick surrender of the Castil De San Lorenzo (Fort Chagre), at the mouth of Charges River, solidified Vernon's reputation just a few months later. Newspapers of the day began comparing Vernon to Sir Robert Blake, the most famous British Admiral of all time, as Vernon had "Revived the British Glory, " as some of the medals proclaim. These victories caused the British government to plan an even more daring assault on the "Mecca" of the Spanish Caribbean trade network, Carthagena (modern day Cartagena, Columbia). In 1741, the magnanimous Admiral Vernon found himself in joint command, along with British Army General Wentworth, of a land and naval assault on Carthagena.

The man who was supposed to be in charge of the so-called Carthagena Expedition of 1741 had died on the 9 week voyage to the West Indies. The assault employed both British regulars and colonial troops that were raised in the American colonies. He distinguished himself a war hero, leading sorties against the Spanish.

Even though Vernon's reputation was ultimately tarnished after the expedition failed to take the city; due to squabbles between he and Wentworth, and because about half the British and American forces died of tropical disease; medals commemorating the victory were already being struck in Britain in advance of any military action. Some show the Spanish commander, Blass De Lesso, surrendering his sword. Others, like this piece, show Vernon touring the conquered city.

Vernon did "view the town" but it was from afar, and from a boat. This disastrous expedition was a sore subject in the American colonies, due to the abuse of colonial troops, and it was a definite, contributing factor to the American Revolution. Lawrence, on the other hand, continued to admire his commander, and upon his return to Virginia in 1742, he named his plantation Mount Vernon, in honor of the Admiral.

Young George admired his older brother and longed for his own King's commission some day. Looking for something out of the ordinary? We scrutinize thousands of PCGS and NGC slabs to provide you with coins that are truly special, and we do it with fast, knowledgeable, and courteous service. Whether you are seeking beautiful color, an exceptional strike; or maybe proof-like luster, a rare die variety, or even CAC verification; we have something for everyone. The Photographs seen here are compliments of DM Rare Coins Coin Photography Service!