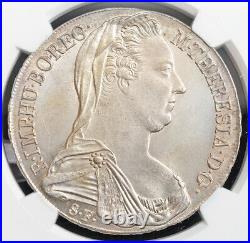 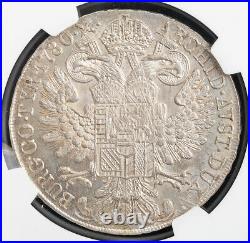 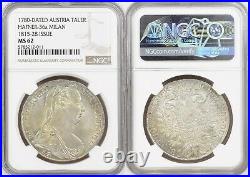 Crown above double headed imperial eagle, large multiple coat of arms with three crowns and lion. This example is one of the earlier and more sought after issues with less mintage. Some of the differences to the re-strike are the eagle´s wing-feathers, the round brooch with nine pearls and the larger bust. A good addition for every Austrian- and Italian coins collector and not a common and recent restrike! See also other languages; May 13, 1717 Ã¢â, ¬ November 29, 1780 was a reigning Archduchess of Austria, a Queen of Hungary and Bohemia, and a Holy Roman Empress.

Maria Theresa was the oldest daughter of Elisabeth Christine of Brunswick-WolfenbÃfÂ¼ttel and Emperor Charles VI, who promulgated the Pragmatic Sanction to allow her to succeed to the Habsburg monarchy. Opposition to her acceding to the throne led to the War of the Austrian Succession in 1740. After Emperor Charles VII, who claimed the throne, died in 1745, Maria Theresa obtained the imperial crown for her husband, Francis I. Though she was technically empress consort, Maria Theresa was the de facto ruler of the nation, and she began styling herself Holy Roman Empress in 1745. Maria Theresa had in fact already begun her rule in 1740 during the Austrian War of Succession.

Maria Theresa helped initiate financial and educational reforms, promoted commerce and the development of agriculture, and reorganized the army, all of which strengthened Austria's resources. Continued conflict with the Kingdom of Prussia led to the Seven Years' War and later to the War of the Bavarian Succession. She became dowager empress after the death of Francis and ascession of her son Joseph as emperor in 1765. Maria Theresa criticized many of Joseph's actions but agreed to the First Partition of Poland (1772). A key figure in the power politics of 18th century Europe, Maria Theresa brought unity to the Habsburg Monarchy and was considered one of its most capable rulers.