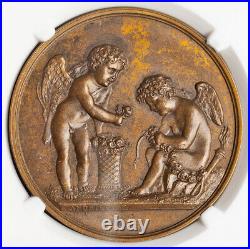 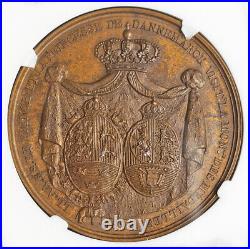 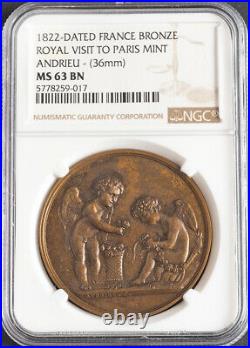 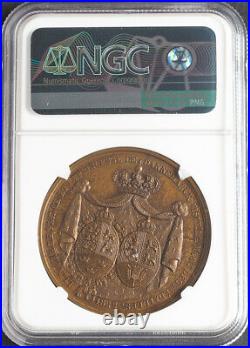 "Danish Royal Couple, Paris Mint Visit" Medal. Mint Place: Paris Mint Year: 1822 Medallist: F. Certified and graded by NGC as MS-63! Visit of Prince Christian (who was King of Norway in 1814 for a short time and later, became King of Denmark as Christian VIII) & Princess Caroline Amalie of Schleswig-Holstein-Sonderburg-Augustenberg to the Parish mint in 1822.

Material: Brass or Bronze Diameter: 41mm Weight: 37gm. Obverse: Cupid with bow and quiver with arrows on shoulder, offers Hymen a rose to add to the garland he is making. Burning torch (allegoric for the passion of love) to right.

Reverse: Crowned oval coat-of-arms of the Kingdomf o Denmark and Schleswig-Holstein. LE PRINCE ET LA PRINCESSE DE DANNEMARCK VISITt. His and her majesties the Prince and Princess of Denmark, visit of the royal mint for coins and medals. (28 June 1796 9 March 1881) was queen consort of Denmark as the second spouse of King Christian VIII between 1839 and 1848. Caroline Amalie was the daughter of Frederick Christian II, Duke of Schleswig-Holstein-Sonderburg-Augustenburg, and Princess Louise Auguste of Denmark; Caroline Amalie's mother was the only daughter of Christian VII and his British wife, Queen Caroline Matilde, after whom she was named.

She was born in Copenhagen and lived there until 1807, when she moved with her family to Augustenborg. She was given a conventional education for an upper class female of her time.

Her mother introduced her to the heir apparent to the Danish throne, the future Christian VIII, and encouraged them to marry. Reportedly, Caroline Amalie fell in love with Christian, who found her attractive. Christian had divorced his first spouse Charlotte Fredericka of Mecklenburg-Schwerin in 1810 on grounds of adultery. The same year, Christian and Caroline Amalie were engaged.

The wedding took place in 1815. Between 1816 and 1817, the couple lived in Odense, where Christian served as Governor of Fionia. Between 1818 and 1822, they undertook numerous trips through Europe together. They visited various resorts in an attempt to cure their inability to have children. Christian devoted himself to the sciences, mineralogy and geology in particular.

While Christian became celebrated for his scientific interests, Caroline Amalie was a composer who wrote numerous piano pieces. The personal relationship between Caroline Amalie and Christian was described as harmonious and as an image of the contemporary ideal of marriage. Her acceptance of her spouse's infidelity was regarded as something suitable and appropriate within contemporary gender roles.

Her amiable personality made her respected and well liked by the rest of the royal House, and she is described as a good stepmother of her stepson Frederick. In 1839, when King Frederick VI died, Caroline Amalie, as the wife of Christian VIII, became Queen of Denmark. She was considered instrumental in the pro-German party on the matter of the duchies of Schleswig-Holstein.

Early on, Caroline Amalie was active within philanthropy. She founded the poor house Dronning Caroline Amalies Asyl in Copenhagen in 1829, the poor house Dronningens Asyl in Odense in 1836, the Kvindelig Plejeforening for sick and women in childbirth in 1843. Her charitable projects for poor orphans gave her the name "The Poor Children's Mother" and "The Royal Foster mother of the Little Ones". As hereditary princess and later as queen, she used her position to launch the charitable role as a role model for the female members of the nobility and upper classes, which called for upper-class women to be actively involved in society through philanthropy.

By doing so, women found a public and political role acceptable to combine with the popular 19th-century role of a Christian wife and mother in Danish society. Her introduction of a new role model for women is considered to have had great impact on Danish society. Caroline Amalie was a follower of the religious ideas of N. Grundtvig, whose movement she actively supported, such as the Grundtvigian priests P. In 1841, she founded an orphanage, Dronning Caroline Amalies Asylskole, whose school was inspired by the ideas of Grundtvig.

She was not described as an intellectual herself, however she regarded it as a duty to introduce the representatives of art and literature at court and act as their supporter. It is not clear whether or not she ever exerted any influence in state affairs.

During the conflict between Denmark and the duchies of Schleswig and Holstein, her brothers, Christian August of Augustenborg and Frederick of Nør, came to be in opposition against Christian VIII and Denmark. This caused a difficult situation for Caroline Amalie, who was suspected for conspiring with her brothers against Danish interests, especially by the nationalistic liberals in Copenhagen. This made her unpopular and exposed to some hostility during the last years of Christian's reign. Caroline Amalie became a widow in 1848 and survived her spouse for more than thirty years. She took up residence at Sorgenfri Castle north of Copenhagen, but due to ill health she preferred to spend winters in southern Europe.

She also outlived her stepson by seventeen years. Hence she lived to see Christian IX become king with her niece Louise of Hesse-Kassel as queen. During her life as a queen dowager, she enjoyed more popularity than she did as queen.

She continued with her charitable projects: in 1852, she took over as protector of the charitable women's society Det Kvindelige Velgørende Selskab after queen dowager Marie, and in 1863, she encouraged queen Louise to open the deaconess institution. She died in 1881 and was buried at Roskilde Cathedral next to Christian VIII. Christian VIII (18 September 1786 20 January 1848) was the king of Denmark from 1839 to 1848 and, as Christian Frederick , King of Norway in 1814.

Christian was born at Christiansborg Palace in Copenhagen. He was the eldest son of Hereditary Prince Frederick of Denmark and Norway and Duchess Sophia Frederica of Mecklenburg-Schwerin. His paternal grandparents were King Frederick V of Denmark-Norway and his second wife, Duchess Juliana Maria of Brunswick-Wolfenbüttel. Christian's mother died in 1794 when he was eight years old, and his father died in 1805 when Christian was nineteen. His upbringing was marked by a thorough and broad-spectrum education with exposure to artists and scientists who were linked to his father's court. Christian inherited the talents of his highly gifted mother, and his amiability and handsome features are said to have made him very popular in Copenhagen. Christian first married his cousin Duchess Charlotte Frederica of Mecklenburg-Schwerin at Ludwigslust on 21 June 1806.

His first-born son was Christian Frederik, who was born and died at Schloss Plön on 8 April 1807. His second son became Frederick VII of Denmark. The marriage was dissolved by divorce in 1810 after Charlotte Frederica was accused of adultery.

Christian married his second wife, Princess Caroline Amalie of Schleswig-Holstein-Sonderburg-Augustenburg (daughter of Louise Augusta of Denmark, the only sister of Frederick VI) at Augustenborg Palace on 22 May 1815. The couple was childless and lived in comparative retirement as leaders of the literary and scientific society of Copenhagen until Christian ascended the throne of Denmark. Christian had ten extramarital children, for whom he carefully provided. It has been suggested that these extramarital children included the fairy tale author Hans Christian Andersen, though there is little evidence to support this. In May 1813, as the heir presumptive of the kingdoms of Denmark and Norway, Christian was sent as.

(the king's highest representative in Norway) to Norway to promote the loyalty of the Norwegians to the House of Oldenburg, which had been very badly shaken by the disastrous results of Frederick VI's adhesion to the falling fortunes of Napoleon I of France. Christian did all he could personally to strengthen the bonds between the Norwegians and the royal house of Denmark. Though his endeavours were opposed by the so-called Swedish party, which desired a dynastic union with Sweden, he placed himself at the head of the Norwegian party of independence after the Treaty of Kiel had forced the king to cede Norway to the king of Sweden.

He was elected Regent of Norway by an assembly of notables on 16 February 1814. This election was confirmed by the Norwegian Constituent Assembly convoked at Eidsvoll on 10 April, and on 17 May the constitution was signed and Christian was unanimously elected king of Norway under the name Christian Frederick (Kristian Frederik in Norwegian).

Christian next attempted to interest the great powers in Norway's cause, but without success. On being pressed by the commissioners of the allied powers to bring about a union between Norway and Sweden in accordance with the terms of the treaty of Kiel, and then return to Denmark, he replied that, as a constitutional king, he could do nothing without the consent of the parliament (Storting), which would not be convoked until there was a suspension of hostilities on the part of Sweden. Sweden refused Christian's conditions and a short military campaign ensued in which the Norwegian army was defeated by the forces of the Swedish crown prince Charles John. The brief war concluded with the Convention of Moss on 14 August 1814. The Storting in its turn adopted the constitutional amendments necessary to allow for a personal union with Sweden and on 4 November elected Charles XIII of Sweden as the new king of Norway.

On 3 December 1839 he ascended the Danish throne as Christian VIII. The Liberal party had high hopes of the giver of constitutions. However, by this time, Christian had become more conservative, and disappointed his admirers by steadily rejecting every Liberal project. Administrative reform was the only reform he would promise. In his attitude to the growing national unrest in the twin duchies of Schleswig and Holstein he often seemed hesitant and half-hearted, which damaged his position there.

It was not until 1846 that he clearly supported the idea of Schleswig being a Danish area. King Christian VIII continued his predecessor's patronage of astronomy, awarding gold medals for the discovery of comets by telescope and financially supporting Heinrich Christian Schumacher with his publication of the scientific journal. His only legitimate son, the future Frederick VII (18081863) was married three times, but produced no legitimate issue.

Since he was apparently unlikely to beget heirs, Christian wished to avert a succession crisis. Christian commenced arrangements to secure the succession in Denmark. The result was the selection of the future Christian IX as hereditary prince, the choice made official by a new law enacted on 31 July 1853 after an international treaty made in London. King Christian died of blood poisoning in Amalienborg Palace in 1848 and was interred in Roskilde Cathedral. Some historians and biographers believe that King Christian would have given Denmark a free constitution had he lived long enough; his last words are sometimes (rather tragically) recorded as "I didn't make it".

This item is in the category "Coins & Paper Money\Coins\ World\Europe\Denmark". The seller is "coinworldtv" and is located in Wien. This item can be shipped worldwide.