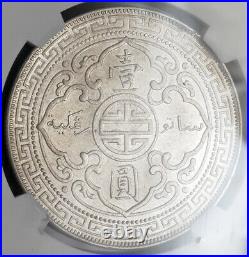 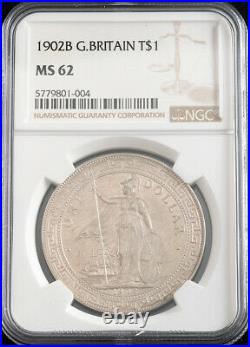 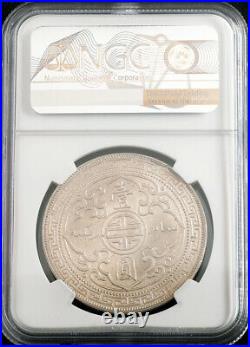 Comment: Incuse mint letter (B) inside trident! Legend: ONE DOLLAR / 1902. Reverse: Arabesque design with the Chinese symbol for longevity in the center, and bilingual denomination in Chinese and Jawi Malay.

With the extension of British trading interest's in the East, especially after the founding of Singapore in 1819 and Hong Kong in 1842, it became necessary to produce a special Dollar so as to remove the reliance of a British Colony upon the various foreign coins then in circulation. The British Trade Dollar was minted from 1895 for Hong Kong and the Straits Settlements. But after the Straits dollar was introduced to the Straits Settlements in 1903, it became exclusively a Hong Kong coin, with the last being produced in 1935. Those with the mint mark "B" were produced at the Bombay mint; others, marked "C", were struck in Calcutta.

This item is in the category "Coins & Paper Money\Coins\ World\Asia\China\Empire (up to 1948)". The seller is "coinworldtv" and is located in Wien. This item can be shipped worldwide.