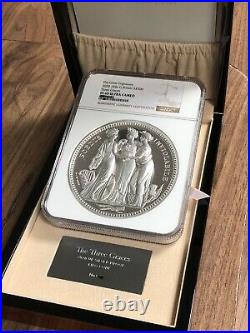 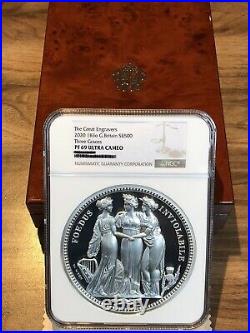 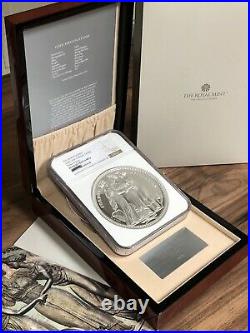 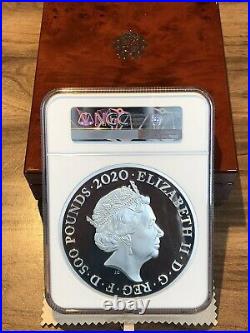 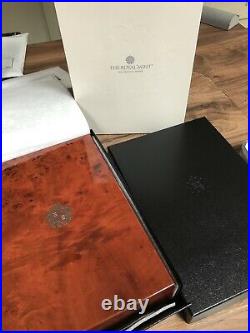 2020 Royal Mint Three Graces Silver Proof ONE KILO 1kg - NGC PF69. Further Photos and Details on request. This coin is part of the second release of gold and silver collector's coins in the collector series entitled the "Great Engravers", issued to highlight some of the Royal Mint's great artisans who have made significant contributions to British coinage - many regarded as numismatic masterpieces.

The first issue featured Una and the Lion. Created by the renowned engraver, William Wyon, early in his decorated career with the Royal Mint, the original coin known as The Three Graces was a pattern made in 1817 for a Crown denomination produced late in the reign of King George III; it was never circulated but has earned a reputation for its attractive and symbolic reverse. The art world that Wyon was establishing himself in was dominated by neoclassicism. Its proponents were influenced by stories of Ancient Greece and Rome and the simple, symmetrical style they saw in artefacts, engravings and on their Grand Tours of Europe. The obverse of the coin depicts the crowned old head of Queen Elizabeth II facing right, wearing the Royal Diamond Diadem crown worn for her Coronation (her effigy known as the "Fifth Portrait").

In small letters below the head, the artist's initials J. Running continuously around the effigy is the monarch's legend, followed by the date of issue and the face value: ELIZABETH II · D · G · REG · F · D · 500 POUNDS · 2020 ·. Translated from Latin: Elizabeth the Second, by the Grace of God, Queen, Defender of the Faith, followed by the value and denomination in English and the year.

Obverse Inscription ELIZABETH II · D · G · REG · F · D · 500 POUNDS · 2020 ·. Within a beaded border, the reverse features, from left to right, the female representations of Ireland, England and Scotland. They are identified by the implements at their feet - respectively a harp, a shield bearing the cross of St George and an oversized thistle; additionally, the also carry floral symbols in their crowns: shamrocks, roses and more thistles. This item is in the category "Coins\Coins\British\Proof Sets/Coins\2000s". The seller is "pashi_48" and is located in this country: GB.

This item can be shipped to United Kingdom, European Union.