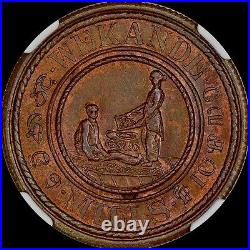 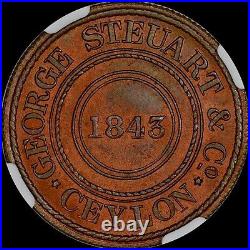 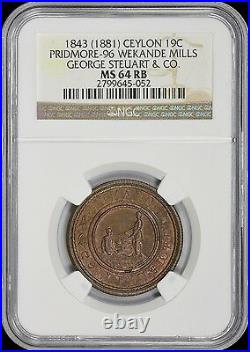 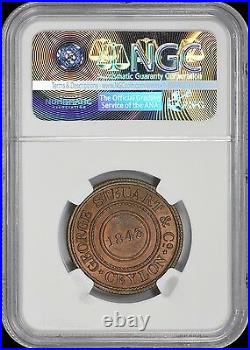 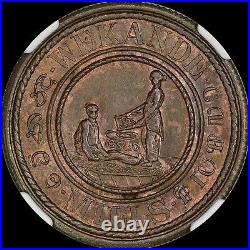 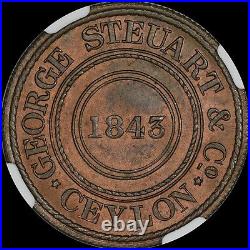 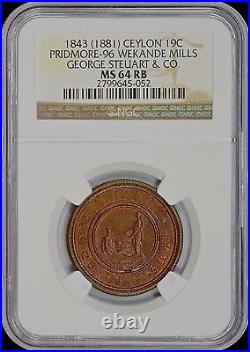 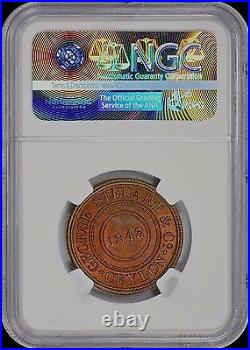 Check out the very cool die doubling on the "S" in Steauart, shown in picture 5 above! The "Wekande Mills" tokens were paid to the laborers daily as their wages, for use in local commerce. Being such, relatively few have survived in mint state condition and especially in MS64 RB preservation. George Steuart & Co's.

This was in fact issued in 1881 and had a value of 19 cents. At this time the mills employed around 1,500 staff. It was designed by the manager of the mills, Charles Hendry.

The George Steuart tokens dated 1843 had the company name on the obverse. The company was first started by Capt James Steuart in 1835. In 1843 his brother Capt George Steuart assumed control and the Company took his name.

Although the tokens had 1843 inscribed on them, were actually minted in 1881. The design was created by Charles Hendry the manager of the mills. On the reverse the tokens had two women at work with Wekande Mills in English, Sinhala and Tamil. Although the Sinhala and Tamil writing was inaccurate, this was the only token with all three languages in it. To understand the use of coffee mills tokens, it is useful to trace briefly the development of the coffee industry in Ceylon.

Though coffee had been grown in Ceylon for many years, it did not become a major export till the latter half of the 1830s. During the period of the Dutch occupation, coffee grown in the interior was brought to Colombo by traders and exported in very small quantities. In early British times, the import duty in England favored coffee grown in the West Indies. The abolition of slavery in the West Indies and the refusal of the freed laborers to work on the estates saw a reduction of production there. As a result, coffee prices in London rose.

The duty on coffee was reduced and favorable tariffs for West Indian coffee were revoked. Duty was set at six pence per pound. These factors provided the impetus for coffee plantation to open up in Ceylon.

With the opening up of the roads to the interior, transport difficulties were overcome. Officials of the Government took this opportunity to both open up areas for cultivation and engage in land speculation. The rapid growth of the coffee industry saw a large influx of mainly illiterate labor.

There was a need to have a simple system to pay this increasing labor force. According to the Labor Law Ordinance of 1841, the workers had to be paid at the conclusion of each day. The task unit was 4 ½ pence or 19 cents per half hundred weight (56 pounds) of coffee.