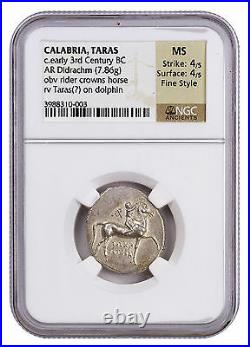 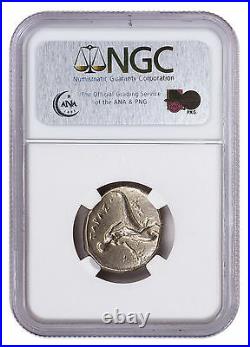 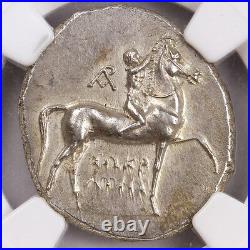 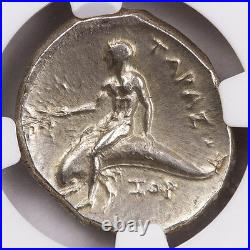 Greek City of Taras Silver Didrachm Rider Crowns Horse & Taras NGC MS SKU43827. Why add this Ancient Silver Didrachm to your collection? The Greek colony of Taras was established in 706 BC by refugees from Sparta in the area currently known as Taranto, in southern Italy. The geography of the city created a natural harbor, which quickly became an important commercial center that needed a defensive military force.

Soldier's salaries would have been a large drain on the city's treasury so the Tarantines mined and minted a large amount of silver didrachms. They remained an important trading port for more than two hundred years before they were brought into the Roman Empire by conquest in 207 BC. Patron symbol of Taras graces the coin. The city is named for Taras, the patron diety. The son of Poseidon, Taras is featured on the reverse riding a dolphin.

The image is from the founding myth that Poseidon sent a dolphin to rescue Taras after a shipwreck. The obverse depicts a youth on horseback reaching up to crown a horse with a wreath. Interestingly, peoples from the coastal city of Taras were also dedicated horsemen. Mint State Fine Style Ancient Coin.

This silver Didrachm, struck in the early 3rd Century BC, is graded Mint State (Sheldon Scale equivalent of 60-62) by independent experts at the Numismatic Guaranty Corporation (NGC), with additional grading of 4/5 for strike and surface characteristics. This coin also earned the NGC designation of Fine Style, indicating that the coin will have exceptional visual design impact. Add this coin from a unique peoples to your collection today! Specifications for this Greek City of Taras Silver Didrachm - Rider Crowns Horse and Taras on Dolphin c. Early 3rd Century BC NGC MS (Strike: 4/5 - Surface: 4/5 - Fine Style) SKU43827. We cannot make any price adjustments after the sale is complete. Product Photo Policy: MCM attempts to display product images shown on the site as accurately as possible. We take all of our photos in house and due to reflections on the mirrored or proof surfaces of a coin there may appear to be'black' when there is not. If a coin has a color on it at all it will be described as'colorized' in the description or title. Due to the large inventory we sell, we use stock photos. Serial numbers will vary from the image shown unless specifically stated in the product listing that the item pictured is the item you will receive. INTERNATIONAL ORDERS POLICY: We are accepting international orders from select countries.

These charges are the customer's responsibility. However, we cannot guarantee this due to the volume of orders we process each day.

Beyond the 30-day return period, Company is under no obligation to accept return of any product, but may in its discretion do so pursuant to this policy, for up to one year from the invoice date. ModernCoinMart (MCM) was launched in 2004 and quickly set the standards for online sales of bullion, US coins and world coins. Join over 100,000 loyal customers and feel confident purchasing from a company that's spent a decade building a solid and stellar reputation trusted and recognized around the world. That's the MCM way. Roman Republic Silver Denarius of M Marcius c.

This listing is currently undergoing maintenance, we apologise for any inconvenience caused. The item "Greek City of Taras Silver Didrachm Rider Crowns Horse & Taras NGC Mint State" is in sale since Thursday, April 20, 2017. This item is in the category "Coins & Paper Money\Coins\ Ancient\Greek (450 BC-100 AD)". The seller is "mcm" and is located in Sarasota, Florida. This item can be shipped worldwide.