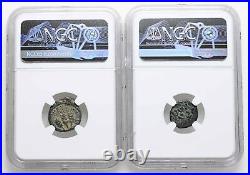 NGC Certified - Lot of 2 Bible Coins, Herod Agrippa I and Porcius Festus, Prutah. Herod Agrippa I is mentioned in the Bible in connection with the imprisonment of Peter. His death is also recorded in the book of Acts, as well as Josephus.

Then Herod went from Judea to Caesarea and stayed there. He had been quarreling with the people of Tyre and Sidon; they now joined together and sought an audience with him. After securing the support of Blastus, a trusted personal servant of the king, they asked for peace, because they depended on the king's country for their food supply.

On the appointed day Herod, wearing his royal robes, sat on his throne and delivered a public address to the people. They shouted, This is the voice of a god, not of a man.

Immediately, because Herod did not give praise to God, an angel of the Lord struck him down, and he was eaten by worms and died. Porcius Festus is mentioned in the Bible in connection with the trial of Paul.

Three days after arriving in the province, Festus went up from Caesarea to Jerusalem, where the chief priests and the Jewish leaders appeared before him and presented the charges against Paul. They requested Festus, as a favor to them, to have Paul transferred to Jerusalem, for they were preparing an ambush to kill him along the way. Let some of your leaders come with me, and if the man has done anything wrong, they can press charges against him there. After spending eight or ten days with them, Festus went down to Caesarea.

The next day he convened the court and ordered that Paul be brought before him. When Paul came in, the Jews who had come down from Jerusalem stood around him. They brought many serious charges against him, but they could not prove them. Welcome to Holding History Inc! We specialize in ancient and medieval coins, as well as obsolete US coins.

We have been professional dealers for years, and offer a wide range of inventory and friendly customer service. This is for altered items. If you clean a coin, or alter an item in any way, we are no longer able to take a return on the item. We will respond as quickly as possible to any inquiries.

Listing and template services provided by inkFrog. This item is in the category "Coins & Paper Money\Coins: Ancient\Roman: Imperial (27 BC-476 AD)". The seller is "holding_history" and is located in this country: US. This item can be shipped worldwide.